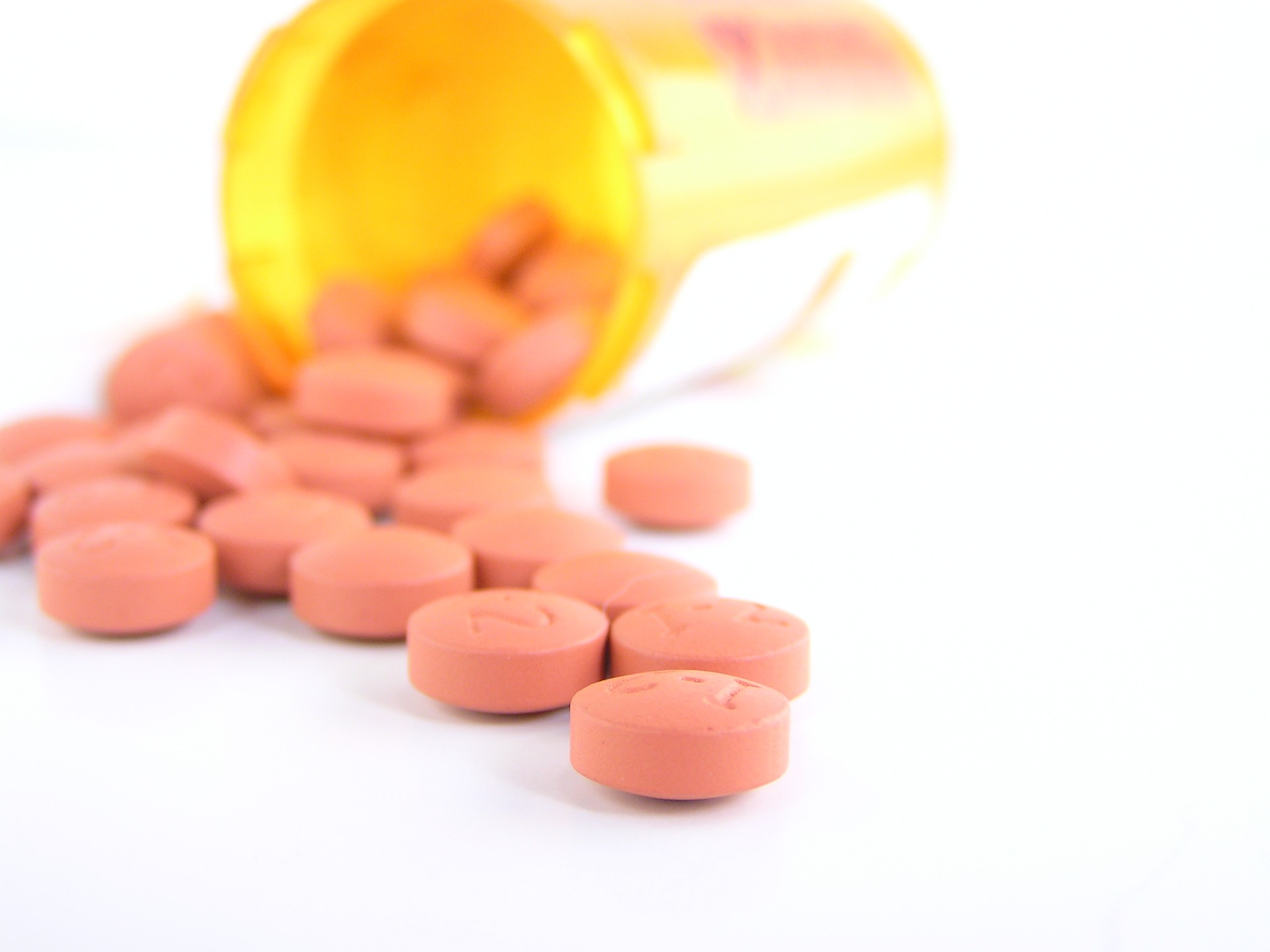 “Prevention is better than cure.” In diverse fields ranging from healthcare to public safety to education, leaders have long recognized that the preventative approach is crucial for averting problems before they occur. For example, screening for hypertension and managing the condition is preferable to waiting for a heart attack to occur before treating it. It is far easier to identify and mitigate issues early, rather than letting them fester and intensify over time.

When gathering feedback on controversial community issues, the same paradigm can help reduce challenges associated with the public input process. The need to balance the interests and perspectives of multiple stakeholder groups can be contentious and divisive. The “painkillers vs. vitamins” paradigm helps illustrate the necessity of engaging with the public early in order to ensure an effective and productive citizen engagement process. 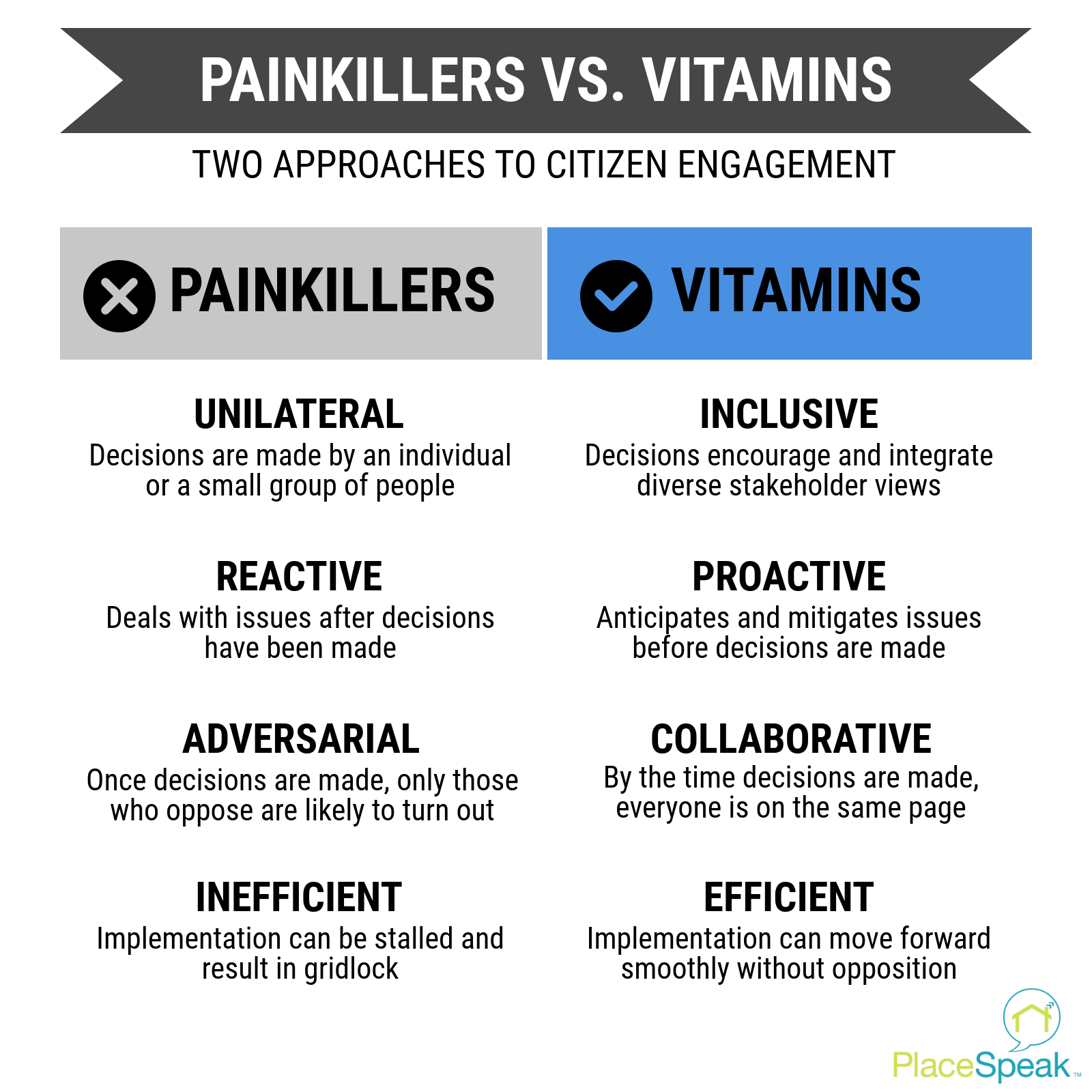 Decision-makers often favour the Decide, Announce, Defend (“DAD”) approach. The ability to make decisions without the hassle of the public input process is frequently perceived as more efficient. On the surface, City Hall can make a decision in a matter of hours instead of going through weeks of public meetings, town halls, or online engagement processes. However, decisions that have been made unilaterally are unlikely to reflect the concerns and priorities of the community. This top-down method frequently results in ongoing challenges and can end up costing a lot more in the long run.

By failing to take community and stakeholder concerns into consideration, projects can stall indefinitely due to a lack of social licence. Social licence is defined as a local community’s acceptance or approval of a project or ongoing presence in an area. This is especially true for controversial projects surrounding issues of development, gentrification, resource extraction/management, and more.

In an expert interview with former city planner Patrick Condon, he explained that when the final decision is announced without incorporating public input, “all…citizens can do is object.” After the final decision has been made, the only people who are likely to turn out are those who oppose it, resulting in an adversarial relationship between members of the public and decision-makers.

When decisions are made without community input, the outcome is likely to be met with public anger, protests, and other forms of opposition. They then have to spend a lot of time, effort and money mitigating issues after the fact. The ensuing gridlock can bring negative social and economic consequences for both the proponent and the community.

In contrast to the “painkiller” approach, which is reactive and seeks to tackle issues after the fact, the “vitamin” approach takes a proactive approach. Just as an annual physical checkup aims to identify and treat any potential health challenges, the “vitamin” approach to citizen engagement not only anticipates potential areas of conflict, but actively solicits feedback and responds to issues early.

By seeking out community and stakeholder input throughout all stages of the decision-making process, challenges and concerns can be identified and solutions can be co-created and integrated into the final decision. While it is useful to draw precedent and best practices from other jurisdictions, there is no one-size-fits-all solution to community problems. By drawing from the expertise of citizen experts, solutions and outcomes can be tailored to the unique needs and priorities of each community.

Involving residents in shaping the policies that will impact their lives on a day-to-day basis is also crucial to gaining buy-in and support. By the time the final decision is made, community members have had a chance to work through their differences and consider the impact of different policies or proposals on their community. In doing so, participants can start to move towards compromise. Instead of an adversarial and divisive process where there are winners and losers, the goal is to create a collaborative process which results in the best outcomes for the largest number of people.

Even if the outcome may not be the top choice of most participants, they recognize that a fair and open process has been undertaken. It is much easier to get community support when participants feel responsible for the final decision, and recognize that their feedback influenced the outcome. There are no surprises and people are unlikely to protest the outcome. The community is able to accept the legitimacy of the process and are less likely to react negatively, allowing implementation to move forward smoothly and efficiently.

What examples of the “painkiller” or “vitamin” approaches to citizen engagement have you seen in your communities? Share your thoughts in the comments below.