In Conversation With: Kyle Bozentko 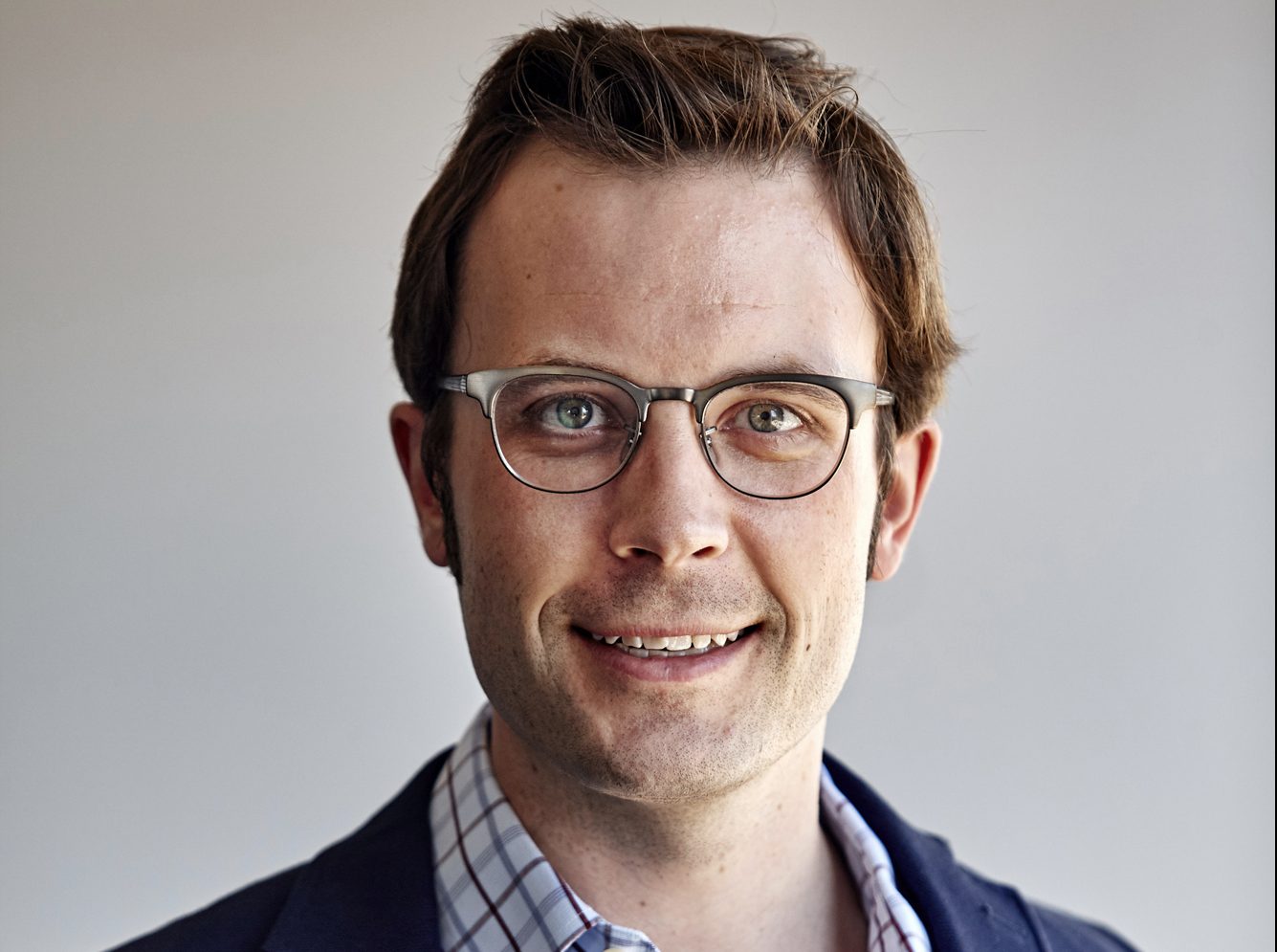 This month, we spoke with Kyle Bozentko, Executive Director of the Jefferson Center. Kyle brings over a decade of civic engagement, public policy, and political organizing experience to oversee the strategic and organizational development of the Jefferson Center. He received his BA in Political Science and Religious Studies from Hamline University in Saint Paul and his Masters of Theological Studies from the Boston University School of Theology with an emphasis on sociology of religion and politics. Kyle also serves on the Board of Directors of the International Association of Public Participation USA, the Coalition on Recovery Investment, and on the MNsure Health Industry Advisory Committee.

The Jefferson Center recently announced the launch of Your Voice Ohio, a project among Ohio newsrooms geared toward producing more relevant, powerful journalism based on the needs and ambitions of Ohioans and Ohio communities. Focused on the emerging field of engaged journalism, the project will explore new approaches to journalism and community engagement, such as leveraging digital tools for public engagement, hosting community conversations and events, pursuing collaboration between newsrooms, new ways to present information, and more. Lessons in engaged journalism will be hosted on the Knight-funded platform, Gather, housed at the University of Oregon’s Center for Journalism Innovation and Civic Engagement.

1. The Jefferson Center challenges Americans to solve shared challenges around serious and controversial issues, such as healthcare and climate change, primarily through citizens juries. What are one or two key benefits of this approach?

One key benefit of citizen juries is the ability to unpack and allow individual community members or constituents to have the time and space, as well as the resources and information necessary, to dig into more technical, complicated, and cumbersome policy topics or public issues.

2. Participants may come up with very interesting or all-encompassing solutions, but in terms of actually implementing, how have you found that outcome?

That’s one of the key areas where our work has shifted in recent years – recognizing that the work itself around developing and implementing successful, high-impact engagement models and processes requires a lot of pre-event work, and a significant investment of time and energy in supporting community members, or supporting partners and sponsors in developing and sustaining those recommendations and moving them towards implementation.

One of the things that we’ve learned how to be more effective as a partner and facilitator, beyond facilitating in-person engagement processes, is working with individuals, partners and community members to find ways to actually move the recommendations forward on their own. We want to avoid producing a report and walking away, and leaving it up to the whims of those with decision-making authority to do something with it. We have learnt over time that it’s not a successful model for turning recommendations and ideas into action – you need people who are invested and see pathways towards pursuing those things, whether it’s formal or informal, in government policymaking or at the community level.

3. Following the 2016 United States presidential election, there has been much discussion about bridging political or ideological divides. How has this shaped the work that you’re doing?

It has shaped our work in a couple of significant ways, and one of those is in our “Your Voice Ohio” project. We’ve been following up from the 2016 “Your Vote Ohio” project, which looked at how the media engages with their audience in a very contested, electorally significant swing state – to have media partners use engagement practices, both in-person and digital, to inform and shape the coverage of presidential political candidates and their issues, and moving that into asking, how media partners can use engagement practices to effectively shape their reporting around public issues, outside of the presidential or general political campaign context.

It’s easy to say how the news or media provides information that people aren’t getting about the candidates, but it’s much more challenging to identify what their issues are, what the questions they have about policy issues or public issues are, and how to frame effectively around non-campaign issues. So particularly in a place where media itself is a contested space, how can media partners realign with the local context – with their audiences and potential audiences – to help rebuild that trust? It’s been a process of trying to rebuild where that division emerged as a product of, and in coordination with, some of the divisiveness of the campaigns and the 2016 election. We’ve really tried to tackle it head-on by asking, “How do we use these practices to rebuild trust among community members and the media outlets?”

4. That actually ties into another topic that I’d like to talk about. Earlier this year, the Edelman Trust Barometer highlighted a “global implosion of trust” – people don’t believe that their input has an impact on decisions made in their communities. What tangible steps need to be taken in the citizen engagement process to reverse this trend?

While trust is deteriorating amongst individual citizens or constituents and formal institutions, in some cases we do see that people are willing to build trust and connections with one another. One of the challenges is isolation – not utilizing available platforms to be exposed to, or to learn from, people outside their circle of connection. We can try to overcome that by not solely looking towards institutional approaches or government approaches to fix the problem. You need active ways for community members to rebuild connections with one another around shared problem-solving and move it from a place of hyperpartisan politics or divisive issues towards identifying shared concerns and priorities, and finding ways to act on them – whether that’s individually or collectively. We need to see and create spaces for individuals to come together and engage with one another, rather than simply asking them to rehash the difficulties that they have with political processes as they’re currently designed. So expanding the options for priority-setting and problem-solving is a key opportunity where people can learn from, and build trust with, one another and grow with them there.

5. Despite its many benefits, in-person forms of engagement such as citizens juries can be inaccessible to many. What role do you see digital technologies playing in facilitating dialogue and deliberation?

So, I think there’s two key elements. One of them is facilitating and streamlining the process for participants in the room – making engagement processes more fun, more engaging and enjoyable, and more effective. There’s a real opportunity to provide opportunities for people who aren’t in that small group – to provide access to and allow people who are not in the room to digitally engage with their peers or neighbours – to have an understanding of the process that they’re going through, to have chances to weigh in and provide feedback on what they’re seeing in terms of content, educational materials, as well as decisions that might be made.

As for community members who are involved in these processes, if people outside who are  engaging and providing their feedback digitally can weigh in and provide more information and more perspectives for people in citizens juries to consider and incorporate in their decision-making, that’s a way to both build legitimacy, credibility, and expand the network and reach more people in a more effective way. So those are some of the key opportunities that I see for engaging digitally, beyond making the process more enjoyable for people in the room.

6. From your observations, what are some of the barriers that prevent decision-makers from engaging most effectively with citizens?

In the research and interviews that we’ve done with elected officials around us, there are two key elements. One of them is a really pervasive narrative – and sometimes real-life experience – of negative interactions with constituents or community members in unstructured or informal events, such as being yelled at in public or angry people at the podium. That’s an easy way for elected officials or staff/employees doing consultation or engagement to have experiences that perpetuate that negative association.

But the second part of it really comes down to the same problem that everyone faces in daily life – information overload. There’s sometimes an inability to understand where engagement-based input from community members can fit and match alongside the other information and data that they’re using to make decisions. As engagement practitioners and people organizing these processes for people to be involved, it’s up to us to do an effective job of engaging decision-makers early on in knowing what type of information on a particular topic is going to be valuable and important to them, and how to articulate effectively how dialogue or deliberation-based ideas from community members can be differentiated from survey results or polling data that they can get (and are likely getting) from a wide range of sources. If we’re able to provide examples and develop a level of comfort with elected officials or decision-makers about how engagement processes can actually make their interactions with community members more productive and fruitful, they’re more likely to want to be involved.

7. Do you have anything else that you’d like to add?

One of the key things that’s really exciting is our movement towards pairing in-person engagement processes with opportunities for digital engagement. As we have access to more tools – even as simple as dedicated Slack channels or messaging – the more likely we are to open up [citizens juries] so that people can be more actively involved and build the number of people who are involved in these processes, regardless of the topic or issue. It’s really exciting to think of how we can provide opportunities for individuals to contribute even if they’re not in a place to show up to a meeting or can’t take time off to do that work.