In Conversation With Jim Diers 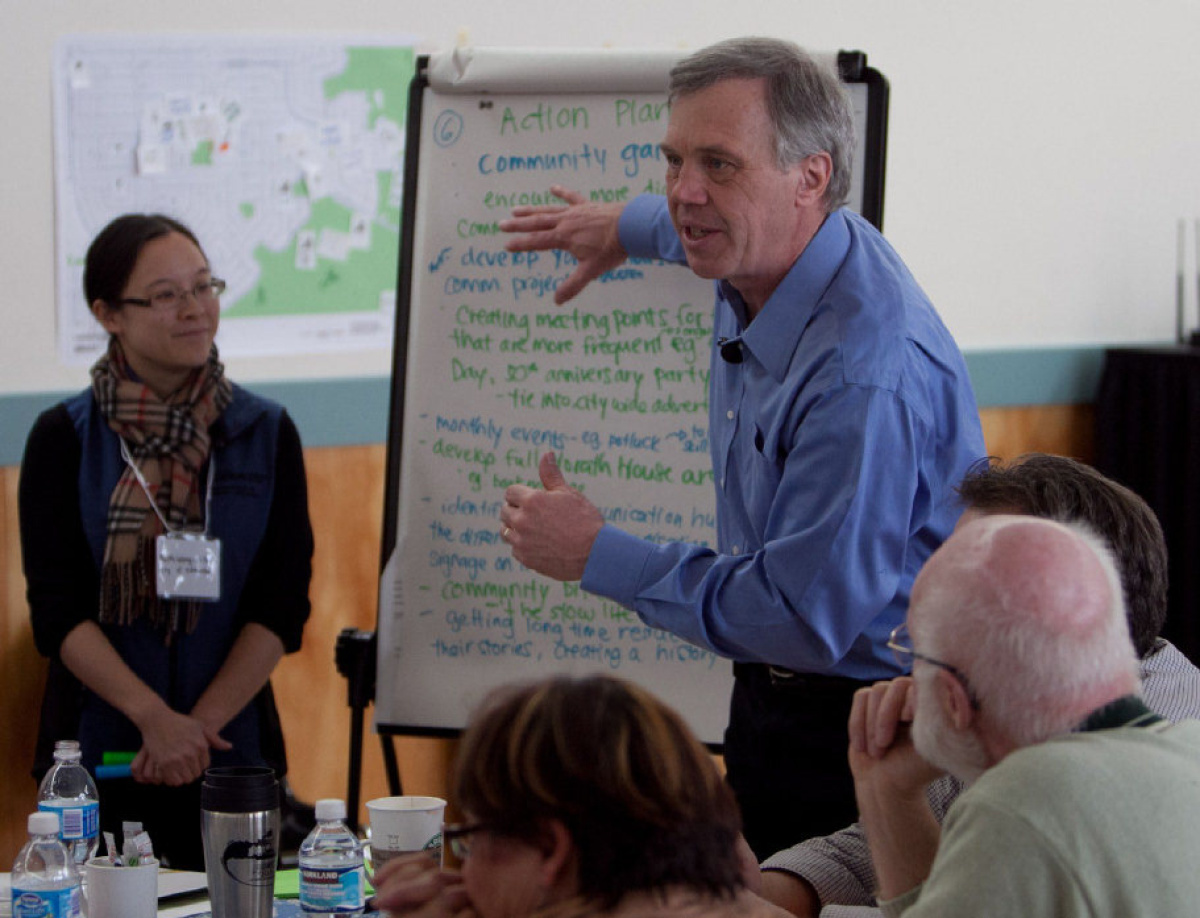 This month, we chatted with Jim Diers, community advocate and neighbourhoods expert. He was appointed the first director of Seattle’s Department of Neighborhoods in 1988 where he served under three mayors over the next 14 years.

His work in the Department of Neighborhoods was recognized with an Innovations Award from the Kennedy School of Government, a Full Inclusion Award from the American Association on Developmental Disabilities, and the Public Employee of the Year Award from the Municipal League of King County. He is also the author of Neighbor Power: Building Community the Seattle Way.

Q: What are some major factors that motivate people to get involved in their community?

A: The first are issues that get people engaged: land use issues, public safety issues, and so on. But what I find exciting is that more and more people are finding ways to come together when there isn’t a crisis, and it makes them much more prepared for a crisis. People are really starting to discover lots of new ways of engaging with each other, whether that’s around the local food movement, having street parties together, people coming together to produce art to celebrate their community, to show what’s special about their culture, about their place, their history and values. People are also increasingly getting involved around environmental projects, whether it’s planting street trees or planting native plants in boulevards, or cleaning up the local streets. Projects fuel people’s passions, where they come together and see the benefits of working collectively.

People are also starting to rediscover that they really need each other. It’s not just about material possessions, but also about building relationships, and there’s no substitute for community when it comes to the things we care most deeply about — whether that’s people’s happiness, mutual support, helping care for each other’s kids, helping to support elders in the community.

Oh, and another reason people get involved in the community is simply because somebody asked them! People can be reticent to step up but if someone recognizes that they’ve got something to offer, and asks them to get involved, they’ll come around.

Q: What is one tangible step that local governments can take to encourage people to get involved in their neighbourhood?

I think the most important step is for governments themselves to start focusing on neighbourhoods. The way our governments tend to be organized is around discrete functions. So in the City of Seattle, we had 32 different departments each one around a specific function, whether that was housing or land use or parks.

In the City of Seattle, we did that by creating a Department of Neighbourhoods, refocusing government on place, having bottom-up plans where neighbourhoods would create their own plans, and it covered all the functions, because it’s in those places that those functions come together.

Q: How can neighbourhood groups get traditionally under-represented groups involved in the conversation?

A: I find that groups want to be inclusive, but they don’t recognize some of the barriers that they put up to inclusion. They try to welcome people, but the agenda has already been set. So people who are different don’t feel that comfortable coming in. I also find that organizations tend to have one kind of people, no matter what kind of organization it is. It’s kind of natural, it’s the way we organize. So if groups want to be inclusive, they need to do less promoting of their cause, and more listening to what people who are underrepresented care about. Often organizations try to convince people to join their cause. If we spend more time listening to what others care about, they are going to get involved if it’s something they’re passionate about.

Another thing is that often people who aren’t involved are those who we think of as having ‘needs’ in our community. We label people by what they don’t have — we label them as non-English speaking, as at-risk youth, as homeless. We label people by what they’re missing, and if we just focus on what they’re missing we think of them as clients who need services, rather than as fellow citizens in our community. It’s about lifting up those labels and recognizing that everyone has gifts to give.

Finally, most people are already organized — they’re just not part of our association! Figure out who’s underrepresented in your group, and what group they are a part of. It might be a cultural group, a faith-based group, a youth group, a seniors’ group. Reach out to those organizations, and work together collaboratively instead of getting everyone to join your group.

Q: Share your favourite example of a local initiative that went really well.

A: I have way too many! One of my favourites is probably from the Ballard neighbourhood of Seattle. Our neighbourhoods tend to be around 5,000 people, so it’s much smaller-scale than a city.

Ballard was the neighbourhood in Seattle that had the fewest number of street trees, and the fewest number of parks in any neighbourhood outside of Downtown Seattle. This was 25 years ago, and there was a woman named Dervilla Gowan, who was passionate about trees. She wanted to see trees up and down her streets. So she put notices in her church bulletins, in the corner grocery stores, in the Ballard News Tribune, advertising for other people who shared her passion for street trees. She tried to find someone on every block of her neighbourhood who shared her passion. If nobody came forward, she’d go to that block and knock on every single door until she convinced someone. Then she got that person to sign a pledge form saying that they’d come to a training about how to plant and take care of the trees, recruit neighbours, and she turned in all the pledge forms with an application for a neighbourhood matching fund that supports community self-help projects.

Through their program, they were able to plant 1,080 trees in one day throughout the neighbourhood of Ballard, because she was able to find someone on every block of Ballard who shared her passion, and got their neighbours to help. They involved 1,000 people, in one day, and people felt so empowered — look at what we can do when we work as a community.

Q: How can neighbourhoods maintain engagement on an ongoing basis?

A: I think a lot of the time our neighbourhood associations tend to be a lot more issue-focused, and often single-issue focused, such as only around bike lanes, or around public safety. I find that the most powerful organizations are the ones that focus on all the things that people care about. So they might have one committee that’s focused on parks facilities, and another one that’s focused on social needs in the community, and another one that’s focused on the environment or land use, and inform the other people when there’s a cause or issue that people can work together on. Otherwise, your organization is only active when there’s a crisis around your specific issue or when your organization cares about it.

Second thing, aside from just being issue-focused, how can you also focus on bringing people together outside of a crisis? It’s about bringing people together around social events, to have regular events, whether it’s dances, movie screenings, community gardens, projects to support ongoing participation on an ongoing basis, so the more activities that are going on, the more sustainable the organization’s going to be.

I often talk about a friend who’s a duck hunter, and he taught me that every duck responds to a call — there’s just a different type of call for each duck. Too often times in our community work, we just sound the “loon” call, and wonder why only loons show up at our meetings! It’s important to use all the calls. Often we use the “meeting” call, which is the worst call for most people, particularly new people, who have never been involved. Calls like the “social” call will get a lot of people engaged who’ll never come to the meetings.

“Seeing active citizens as a strength rather than as a problem is the basis of our democracy.” #civictech

Q: Is there anything else that you’d like to add?

A: I just think we need to focus a lot more in terms of government and community. That’s what makes our cities liveable. It’s the unique character of each neighbourhood, and the way people connect with their neighbourhood, and it’s at the neighbourhood scale that people feel a sense of community. So governments need to start seeing that as a real strength of the city, and to see active citizens as a strength. I think of time neighbourhoods get dismissed, and often for good reason, because a few people who are really engaged are speaking for the whole community. But there’s real potential there. If we could really get active, broad-based engagement, it’s a real strength for government, because they can get a whole lot more done! There are things communities can do that governments can’t do that well, and to start seeing active citizens as a real strength rather than as a problem is the basis of our democracy.

In Conversation With: Lisa Attygalle

In Conversation With Benjamin Taylor