In Conversation With Graham Smith 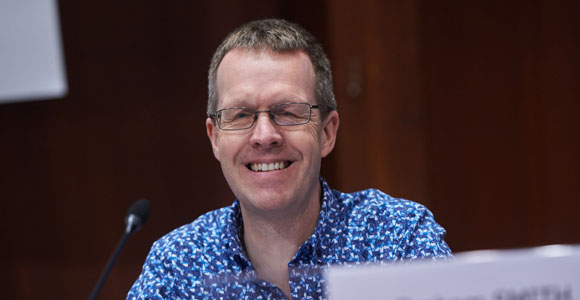 This month, we spoke with Graham Smith, Professor of Politics and Director of the Centre for the Study of Democracy (CSD) at the University of Westminster. He is the author of Democratic Innovations: Designing Institutions for Citizen Participation. His main research interests focus on democratic theory and practice and environmental politics. Graham is on the Executive Board of Participedia and Chair of the Foundation for Democracy and Sustainable Development.

Q: What are some of the barriers that prevent decision-makers from engaging most effectively with citizens?

A: I think the primary barrier is a combination of political will and political imagination. Most politicians lack confidence in public engagement, primarily because they haven’t tried it, or when they have, it’s been organized badly. I think there’s a lack of understanding about how important good design is for participatory exercises. People will often use poorly-thought out designs or whatever the “flavour of the month” is, whether it’s participatory budgeting or citizens’ assemblies, simply because they’ve heard of them rather than choosing the most suitable approach to deal with the challenges they face.

There’s also a lack of trust and confidence amongst citizens towards participatory exercises. There’s a general distrust of politicians and political institutions, but many people have also experienced poor participatory exercises, and are reticent to give up their time and energy unless they’re convinced that it’s going to make significant change or have an impact on political decision-making.

Q: We previously asked Ian McKinnon, Chair of the National Statistics Council of Canada, about what separates market research from citizen engagement. What’s your take?

A: Market research is a form of public engagement, it’s just a very weak form. They do merge into each other with the use of certain types of polling processes and focus groups, but high-quality participation aims to create a space where citizens can consider the collective good, while market research is much more individualized. Good forms of public participation and engagement aim to inculcate perspectives in the public interest, while market research tries to find out about individual preferences.

Q: Given the current political situation in the United States, how can digital technologies facilitate dialogue and deliberation, rather than knee-jerk reactions?

A: We’ve spent decades trying to develop techniques for ensuring good face-to-face deliberation. Digital engagement really is the new kid on the block, and people are still trying to understand how you can actually promote deliberation across difference and ensure that you don’t get polarization or balkanization of debates. I think we’re really in the early stages of developing those sorts of platforms.

Part of this is actually about investment – a lot of investment is focused on social media developments which encourage talking to your friends and people like you. I think the people who are interested in democratic innovation and democratic deliberation are a long way back on the learning curve, and that’s the next big challenge – how do you create platforms which can support deliberation and collective decision-making?

Q: Do you think there’s an appetite for these kinds of platforms?

A: If you asked someone on the street, “Do you want to participate?” they’ll probably say, “No, I haven’t got the time and I’m not interested.” But we know from citizens’ juries, citizens’ assemblies, participatory budgeting, and other processes, that when designed well and with good citizen mobilization processes, people really enjoy engaging. There’s no reason why people wouldn’t feel the same about doing that online: it’s about what the ask is, how well it’s designed, and the sense that these processes have some relationship to decision-making and changing political and social conditions.

Q: Social networks have allowed people to sort and polarize into echo chambers of opinion. How do you convince people to engage respectfully with their fellow citizens who may not share their views?

A: The design of Facebook or Twitter actually accentuate polarization and difference, and I think the same is true for a lot of the channels through which we operate digitally. It is clear from research that you can create institutional designs and platforms where citizens take the process (and each other) seriously. A lot of work is going into this at the moment – many newspapers are very interested in how to deal with comments sections. Mozilla has a large project that they’re working on with various newspapers, so it’s clearly a zeitgeist issue.

Part of the problem is that we’re still working with the technologies that we’ve got, like forums, chat rooms or social media platforms, and thinking, “What can we do to make these places more respectful?” I think that might be the wrong approach. We might actually have to design different types of platforms, with different expectations and possibilities. I’m involved in a couple of platforms where I’ve had to go through a series of stages where I’ve posted a couple of things before they let me have direct contact with other participants, to ensure that I was taking the process seriously.

We also had a project where we hosted a public deliberation around anti-social behaviour and social cohesion, and we were really worried about flaming. We introduced the platform, talked to people about the rules, and told them it was a serious enterprise where feedback would be considered by government officials, and we didn’t have any flaming at all. That’s because we helped craft a particular space that was different from a social media platform or chat room. Some of it may even mean that we can’t always have open spaces – everyone thinks digital means being open to anyone to participate, but sometimes we might need more closed spaces where people are, for example, randomly selected or targeted to participate. We’re at the early stages of design here, and we’ll have to think very creatively, outside of where we are already with social media and current platforms.

Q: How do you encourage people to participate on different platforms instead of the ones that they’re already familiar with?

A: If we think about the affordances of Facebook and other social media, they’re very good for quick, short responses when there’s a problem, for informal conversations, or for advertising. They’re very different from what I’d classify as spaces for political participation. I don’t think we should expect something that was created by a private company to generate profit, where the logic is to create connections between like-minded people, to be the technology on which we do public participation. In fact, it doesn’t surprise me that public participation through Facebook often goes awry.

So we need to build these platforms with different technological possibilities, but the danger is that they’re not used that much, because everyone’s already on Facebook or Twitter. This is not necessarily a problem. Public participation is an unusual exercise, and it’s not what most of us do most of the time. Creating specific platforms for public participation, which we use irregularly when we’re invited or when there’s a need, is not so different from public meetings or participatory budgeting only happen every so often.

Q: As online forms of citizen participation become more ubiquitous, what will be the single largest challenge facing decision-makers? What is the solution?

A: There is a lack of confidence amongst the public that their participation will mean anything at all. People think that governments only want to hear from them to legitimize something that they’ve already decided.

The socialization of political leaders and decision-makers are, in many ways, counter to the dynamics of public participation. If you think about how someone becomes a politician or political leader, they’ve often had to work their way up through hierarchical organizations, such as political parties, political agencies, private corporations, even NGOs. Once you’ve taken the time to amass power, it’s actually quite difficult, psychologically and institutionally speaking, to give up control and enable citizens to be part of the decision-making process. Occasionally, you get these really creative and imaginative leaders who emerge and see the potential of doing democracy differently. In other times, you see political leaders in really difficult situations trying to deal with controversial issues, and stumbling across public participation and becoming converted. The more decision makers see participation working, the better.

But as I’ve said, political leaders doing sham participation is probably the worst thing that can happen to public participation. I’d rather we have no participation exercises at all rather than have it be done badly and putting people off politics.

Tags:
Previous Article
In Conversation With Dinorah Cantú-Pedraza
Next Article
Creating Dialogue and Deliberation in a Polarized Political Climate