In Conversation With Benjamin Taylor 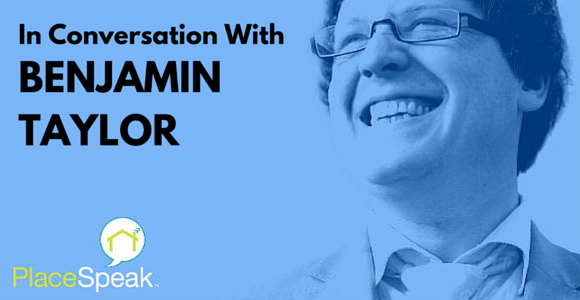 This month, we spoke with Benjamin Taylor, a founder and managing partner at RedQuadrant, a public services consultancy. As part of the Shepherd’s Bush Advice Centre (London Borough of Hammersmith and Fulham), he was previously advisor to the leader of the council, involved at the highest level in budget setting, policy, and local strategic partnerships. He is also the founder of the largest community engagement group on LinkedIn, with over 30,000 members.

Q: At CityLab 2015 in London, mayors and leaders were asked: What is the one big thing that cities need to focus on or change in the next five years? What would your response be?

A: That’s a huge first question! I think there are some important angles. First, appropriate to our topic, I would like to see far more focus on coproduction – engagement with citizens in the design, delivery, and management of services –not simply at a ‘consultation’ level but in the day-to-day service delivery. This requires a focus not simply on demand for services (hard enough to meet, certainly, in our current ‘age of austerity’ in the UK, the fiscal challenges to city government in the US, and the coming financial challenges in Australia. No, we have to look beyond demand to the needs driving demands, to try to address them, and beyond need to the purposes people are trying to meet in their lives.

This might mean getting government out of the way; new relationships with individuals, communities (whatever that means!), business, and what we’re now archly calling ‘the community, voluntary, and social enterprise sector. But all too often these initiatives are tinkering around the edges – ‘lipstick on a pig’. It should mean deep transformation to core services, and developing new debates around the ‘third rail’ issues like social housing.

And, by the way, I’m not a huge fan of the concept of directly elected mayors, currently being imposed on the ‘devolution deal’ local areas – a UK initiative which holds much promise, but promises regional centralisation if we’re not careful. Despite having worked as an adviser to a Mayor for many years, I think there’s an important role for local politicians – the more local the better.

So, yes, coproduction would be the ‘one big thing’. On top of that, we need agile service change (with lots of prototyping, experiments, and learning), leadership of organisations with systems awareness, and far far better collaborative leadership between organisations.

Q: You founded several successful LinkedIn groups.  What inspired you to start the Community Engagement Group?

A: I got in at the ground floor of LinkedIn groups, and just started as many as I could in subjects I felt were important – systems thinking, community engagement, public services etc. I believe in community – it’s often the missing factor in thinking about public services.

A: No! And it has thrived, really, on benevolent neglect. Many thanks, though, to Graeme Stuart who provides able moderation and puts a lot of effort into the group. The popularity of LinkedIn is enormous, of course – and it is really gratifying to see that this important area gets so many members – and so much enthusiastic and useful debate.

Q: What do you see as the emerging trends in community engagement as a whole?

A: Well, as above I think a move to coproduction and further into what I call ‘citizen world’. There’s still a role for good, old-fashioned, consultation, for ethnography and for intermediate forms of engagement – more and more though I think we’re moving up the ladder of engagement.

At the same time, we’re having to deal with increased complexity – a mixed economy of provider organisations, and multiple different complex relationships between citizens, communities, customers, users and all kinds of provider groups. I think ways to cope with this complexity are now more important than ever.

Q: What are some of the lessons you learned while engaging the public?

A: Well, I learned a lot about myself! There’s nothing like standing out in a shopping centre asking people for their opinions to give you some positive experiences of surviving rejection.

I’ve learned, like many starry-eyed practitioners, that it’s a lot harder than you might think! I remember one particular evaluation – of a community engagement program – where the expectations of the national funding body far outweighed ours. But when we began to engage on the ground, we found some good work, but really that the funded bodies were still far behind.

But I’ve also learned that ‘deeper’ engagement – the kind of thing I’ve been talking about – isn’t necessarily harder to do than shallow stuff. It might be harder to get permission for! The UK public services as the moment are like a huge laboratory and we have community-run libraries, grand aspirations (partially met) for asset transfer and the like – some of the more radical experiments are going to be the ones that work. There will be a lot of failures too!

I’ve learned a lot of personal skills too, about how to engage, ask open questions, how to facilitate groups, and how to try to get leaders and policy-makers in the same room, on the same page, or seeing the same picture as the public.