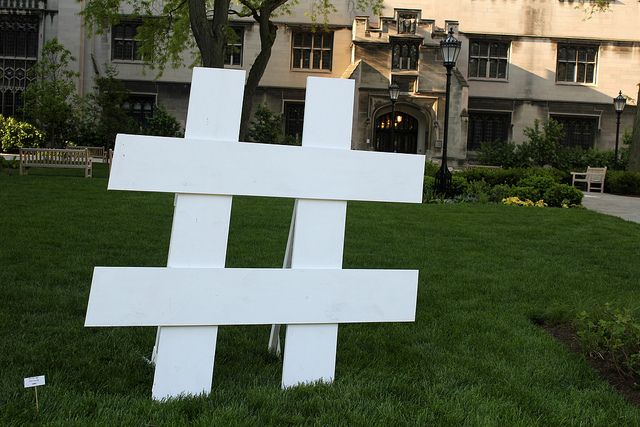 One of the biggest and most important ways residents can ‘claim their place’ and ‘speak their mind’ is by voting in local elections. Unfortunately municipal elections seem to be the forgotten step-child of elections, with voter turnout levels approximately half of their federal counterparts. Part of the reason for this is that people have trouble finding information about them. Local elections tend not to be widely covered in the mainstream media. When they are, the coverage tends to be centered on the big name mayoral candidates in the bigger cities.

Social media, and in particular Twitter, is helping to over come this. If you’ve spent any time on Twitter, you’ve likely come across a hashtag. That’s when something in a tweet has a # prefix. The # is a hash symbol, hence the term hash tag or hashtag. A hashtag is simply a way for people to search for tweets that have a common topic. Basically hashtags help spread information on Twitter while also helping to organize it. The are a great way to see who else is talking about subject that you are interested in.

Hashtags are becoming a powerful tool to learn about and share information on municipal elections that may not be widely covered in more traditional media. Through the use of hashtags, it is easier than ever to find and connect with local government candidates, learn about municipal campaigns, and weigh in on civic issues.

Below you will fins some of the more popular hashtags related to the November 19th municipal elections taking place in the Lower Mainland. If you are already on Twitter, be sure to check them out. If you aren’t yet using this tool, this would be a great opportunity to test the waters. If you do not have a twitter account, you can also follow hashtags on the web through TweetChat.com.

Follow a few of these hashtags and you will quickly find that Twitter is about a whole lot more than sharing what you had for lunch!  And be sure to let us know in the comments if we’ve missed any hashtags you think should be on one of the lists below.

#bcmuni2014 – BC municipal (elections) 2014 – Being used by some media sources, CivicInfo BC, and the Province of BC

We’d also like to remind our readers that PlaceSpeak is active on social media, including Twitter.  If you are not already following us, please take a second to do so.  We’re @PlaceSpeak.