In Conversation With Dinorah Cantú-Pedraza 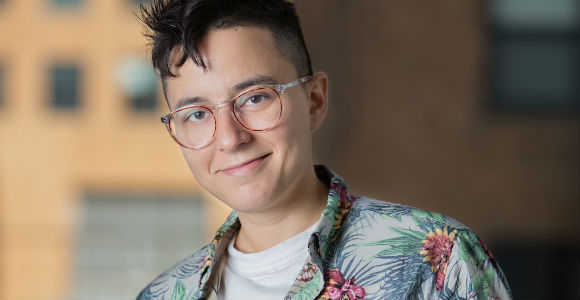 This month, we spoke with Dinorah Cantú-Pedraza, who coordinates the GovLab Academy – an online institute aimed at helping government and social innovators take innovative projects from idea to implementation. A lawyer by training, Dinorah founded and directed the Human Rights Center of the Facultad Libre de Derecho de Monterrey prior to moving to New York in 2012. Under her direction, the Academy has worked with over five hundred innovators from more than 30 countries online and off over the last two years.

1. Governments are increasingly using digital technologies to source ideas and feedback from citizens. What is the most common mistake they make and what is the solution?

The most common mistake is that people don’t work enough on defining the problem that they want the crowd to solve. We’ve realized that the most important aspect of launching any kind of project, not only through crowdsourcing exercises, but also through the hundreds of projects we’ve helped through the GovLab Academy, is taking some time to actually define the problem that you want to solve. I can share some of the tips that we use with our community to help them define their problem better.

First, we ask them if they are disguising a solution as a problem. We get really excited thinking about solutions that we find interesting, and we’re thinking about how to replicate them. As the quote says, “If you only have a hammer, you’ll see everything as a nail.” That’s very problematic, because you don’t know if that’s the most recommended way to address a specific problem.

The other one is having a problem definition that’s specific. Sometimes people define their problem as something that is too broad for them to do anything about it, so I think that you have to do well defining the problem in a way that you can actually solve it. It doesn’t matter if it’s just one specific aspect, but that’s how you can actually achieve change, one aspect by one. That’s also one of the biggest opportunities with crowdsourcing. You can take advantage of the expertise and talents of the crowd to solve a very specific problem; and the people will be excited to participate because they can actually make a difference and have an impact.

It’s also important to think, “Is this a problem, or a symptom of a problem?” So for example, people say that they want to fight climate change. What’s causing climate change? When you start breaking it down, you can focus on one of the causes and break it down further.

Finally, I think that something that can help everyone is making some of the assumptions explicit. For example, understanding who’s harmed by a problem, and if that’s not you, then do some user interviews and understand what’s really affecting them. Who are the key stakeholders who are involved in the issue – what are some of the social and cultural factors that shape it? What are the unknowns that need to be answered to understand the problem fully? And ask yourself: Why has this problem not been solved yet? The answer to this question might actually reveal the true problem that you need to solve.

2. Your colleague, Beth Noveck, talks about the “rise of the citizen expert”. In your experience, how can governments better tap into the expertise of citizens?

This is a topic where we’ve been working and experimenting with different models. We have the challenges model and open innovation model, where we go to a community, work with city officials, help them define a problem, and then launch a challenge to the community to gather their ideas. In some cases, gathering teams of citizens that join the government in developing that idea.

But that’s just one of the many ways in which you can involve citizens’ talents and expertise. The other one is with data: opening data in a way that people can use it, reuse it, distribute it, etc. If you check out OD Impact, we just released a study on the impact of open data. One case study that we’re working on is in Colombia. In its simplest terms, Aclímate Colombia uses diverse open data sources to “identify the most productive rice varieties and planting times for specific sites and seasonal forecasts.”  In short, government opened the data, a civil society organization does the analysis on that data and partnered with farmers and communities, to bring to them information on how to make data-based decisions on when to cultivate a specific type of rice. This has only been going on for a year, but they estimate savings of $3.6m in losses climate-related economic losses.

This is great because it’s open government data empowering the citizens, so it’s about creating the right channels and methodology, and giving citizens and public officials the right tools so they can take action and have a space where everyone can come together to solve the public problems.

3. What role can civil society organizations play in involving citizens in the decision-making process?

Civil society organizations play a key role in creating the right exercises that can take advantage of the different types of expertise e.g. credentials, experiential, geographic, lived expertise, etc. I really like this case in Mexico where the previous president, Felipe Calderón, launched a challenge about “the most absurd government process” which received more than 20,000 applications at the federal, state, and municipal level. The woman that won the challenge shared her experience dealing with the institute that provides health services in Mexico. She had a kid who needed medication twice a month, and would continue to need it through the rest of his life. But for her to receive the medication from the institute, she would need an authorization that had to go through eight hands, and took about 15 days. Just having to do that over and over again was simply ridiculous.

But those kinds of facts are hard to find and understand when you hire a consulting firm that just review all the processes, because the people who have the most expertise are the ones who live through and go through that experience, and civil society organizations can really help figuring out how to better take advantage of that expertise, also by being more open and creating spaces for a more diverse people to come together.

4. You also have a background in law and human rights. How has civic technology impacted the ability to enact change in these fields?

I’m a lawyer, and I specialize in human rights. There were a lot of causes that I was fighting for in Mexico through strategic litigation, and I wanted to further specialize in social, economic and cultural rights, so I came to New York University to do a Masters in Public Policy. During that Masters, when I met Beth as a professor, the class was called Government 3.0. For me, it was life-changing because every new concept that I was learning in that class was something that could have helped me so much in my previous work. I’ve now started to specialize in technology and public policy, because it really opens a new way to solve public problems.

Not only do we need all hands on deck to solve the complexity of the problems we’re facing, through civic technology and data we can actually create or start experimenting with those spaces that can bring everyone together. For me, that’s the biggest change in terms of what I used to do and what I do now. When I was in strategic litigation, the impact could be big, but you had to go case by case by case. Through these tools – by opening to the crowd, creating places where everyone can do something – we can actually lessen the effects of the challenges we are facing right now and get smarter about how we face them.

5. Through the GovLab Academy, you’ve worked with hundreds of innovators from over 30 countries. What are some of the most memorable ideas/concepts?

I personally like the projects that have a direct impact on vulnerable populations. If you go to GovLab Academy, we feature some of the projects that have gone through our program, but I really like Safecity India. It’s about crowdsourcing gender violence in every expression, from microaggressions to sexual assault. It gives voice to people who don’t have voice as reports are on these topics are usually low and through Safecity India, victims are protected through anonymity. The data is later used to build capacity and raise awareness in the police and women’s communities – they create workshops with the police departments and identify hotspots, and for example, the cops react by having more presence and it has a lot of impact in different ways. The projects that make the invisible, visible, are the most important ones to me.

That also connects with recognizing that right now, when we talk about data, we think that data is unbiased. But it’s biased by us and how we define it, and many important things are not translated into data because no one is paying attention or giving it the time. I think the civic tech world needs to make a big push for inclusion and figure out how to involve everyone in the community, and not just the classically privileged group that already has access. How do we make it radically inclusive and reach the people that are not even asked for their opinion? How do we create exercises where we reach them, where we learn about what they have to share so that we can improve policies and the way we address specific public problems or the problems they care the most about?

6. Is there anything else that you’d like to add?

We are helping the municipality become an innovation lab. Everyone involved is getting into the mindset of user-centered design, active prototyping, problem definition, and getting introduced to how to use data and technology to solve problems they face in their day-to-day work and get better results. So just by being able to work with them to define the problem, to launch the challenges, we’ve been able to build more capacity than if we just gave them a class or workshop. It’s learning by doing, and they’ve been finding every moment of the development so useful that they’re becoming invigorated with this idea of why being open is important. However, the key word is pilot and experimentation. We need to keep trying new models, documenting what works and what doesn’t and continue to figure out how to update democracy, make governments smarter on how they solve public problems and create an inclusive and vibrant community that gives a space for the change-maker in all of us.