Board of Directors Update 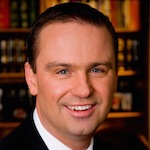 At our March 2014 Annual General Meeting, PlaceSpeak’s Board of Directors welcomed David Bartlett to their ranks. David was the Premier of the Australian State of Tasmania from 2008 until 2011. During his parliamentary career he also held the positions of Minister for Innovation, Science & Technology and Minister for Education & Skills. His time as Premier was characterized by bold reforms designed to lift Tasmania educational outcomes and capitalize on Tasmania’s natural advantages in water, food and renewable energy.

For his work in promoting innovation and broadband infrastructure David was recently named by The Australian as one of Australia’s Top 50 most influential people in technology.

Here is a short video produced by Canada Down Under with David introducing himself and explaining why he is excited about PlaceSpeak:

At the same meeting it was announced that Judy Kirk is retiring from the Board.  We are all grateful to Judy for the tremendous contributions of her knowledge, experience and insight.

The Board also formally acknowledged Renate Bublick for all her hard work as a key advisor. Much of PlaceSpeak’s success in 2013 was due to Renate’s hard work, and diligent effort.